There is a new dolphin prison being built in the United States. Gulfport, Mississippi is opening a new aquarium in the hopes of increasing their tourism and economy. They plan to include a dolphin tank as part of the entertainment for residents and tourists. Gulfport is also home to the other exploitation marine park, Ocean Adventures. Ocean Adventures is associated with The Institute for Marine Mammal Studies. Both IMMS and the site of the new Gulfport Aquarium have been included in our locations for the Annual Empty the Tanks Worldwide event. 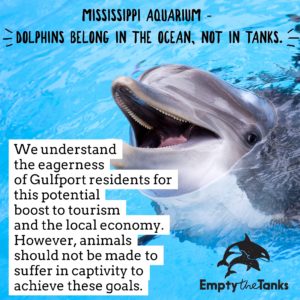 While the rest of the world is shifting their perspectives and opinions on keeping these intelligent animals in captivity, the Mississippi Aquarium is rooting itself into the past. Dolphins are incredibly smart, social and complex creatures. They are self aware, meaning that when they are looking in a mirror they know they are seeing themselves reflected back. The dolphin’s brain has emotional and cognitive abilities similar to our own. According to Dr. Lori Marino, a leading researcher in whale and dolphin brain anatomy, “It may be that many cetacean species have achieved a level of social-emotional sophistication not achieved by other animals, including humans.”

We understand the eagerness of Gulfport residents for this potential boost to tourism and the local economy. However, animals should not be made to suffer in captivity to achieve these goals. There are many areas in the world that have booming tourism because the businesses capitalize on the natural settings and wildlife surrounding them. Tourism can be achieved without keeping dolphins and other animals in captivity for entertainment. Gulfport is home to a beautiful coastline and the city has wild dolphins swimming free in the ocean just off shore. There are several eco-tourism companies that offer dolphin and whale watches out of Gulfport. There is no need for dolphin captivity in any city, especially one that boarders the ocean.

How You Can Help:

Write, call or email the city of Gulfport. Tell them that as a tourist you will not be spending money in Gulfport if they move forward with the dolphin tanks.

Office of the Mayor

Email or call The Mississippi Aquarium and ask that they not include dolphins in their building plans.

Please also consider making a donation to Empty the Tanks so we can continue to supply volunteers with event materials.