By Ashley Lenton, Empty the Tanks

Dolphin Discovery, a Mexico based company has purchased a second dolphin attraction in the United States. They are the largest dolphinarium business in the world. Since their opening in 1994, they have either acquired or opened 24 dolphin facilities.

Dolphin Discovery first came to the United States in 2015, with the purchase of Gulf World, which is located in Panama City, FL. Their latest dolphinarium purchase is yet another US based facility. On September 5, 2018, Dolphin Discovery purchased the Florida Keys based Dolphin Connection. Empty the Tanks was informed of this purchase by our Mexico Chapter volunteers. Dolphin Connection was originally founded in 1990, by the Chicago Zoological Society. It was then privatized in 1996, by Doug and Cheryl Messinger. Cheryl Messinger was the first female president of the International Association of Marine Animal Trainers (IMATA). This sale goes to show that cetaceans in captivity continue to be viewed only as monetary investments and not sentient beings. 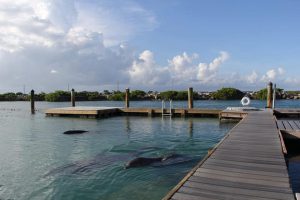 The tides are turning in modern society with the realization that any form of cetacean captivity is abhorrently cruel. However, Dolphin Discovery is refusing to change with the times. Dolphin Discovery, as with most captive facilities, would have you believe that they “contribute to the study and conservation of marine mammals, creating a bond of love and respect through the best interaction experience in marine habitats around the world.” This is false. What they have in fact created is an elaborate theatrical facade of welfare and rescue that many people willingly buy into. From our research there does not appear to be a single paper or article to support Dolphin Discovery’s claim of study and conservation of marine mammals. The truth is that Dolphin Discovery, along with other dolphinarium businesses worldwide, have turned dolphins into amusement park rides. These interactions are food motivated and the dolphin will only receive his dead fish once the job has been completed to the satisfaction of the trainer.

Dolphin Discovery has also reactivated its expansion plan with the construction of the Riviera Cancún Interactive Space and Aquarium project. This expansion investment amounts to $3 million dollars, as well as their plans to open another dolphinarium in Huatulco. Rather than investing that $3 million dollars into genuine conservation projects, Dolphin Discovery wants to instead open more of their tourist traps at the expense of the dolphins.

A dolphin in captivity has been stripped of any semblance of their wild nature, a nature that we humans are inspired by and in awe of. Why else would so many people have “swim with dolphins” on their bucket list? Dolphin Discovery knows this and continues to profit off the countless backs, rostrums and dorsal fins of these exquisite animals. 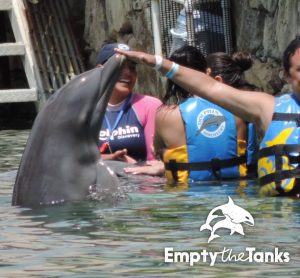 A bottlenose dolphin being forced to interact with tourists in Mexico. PC: Empty the Tanks

Don’t buy the lies, don’t buy a ticket and spread the word that it is NOW time to empty the tanks.

Learn more about our work in Mexico